Writing - How to Edit in a Rush 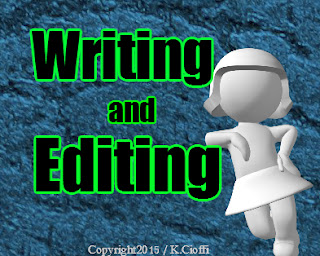 Every writer out there procrastinates. We're not proud of it, but we tend to find ourselves in situations where we start working on a project last minute. Sometimes literally. The result is usually disappointing to everyone involved, but, hey, at least you submitted it, right? Now it's the editor's problem.

Well, if you're that type of writer who unloads a raw draft on an editor, you can be sure you're not well regarded by them. This issue has an easy fix: editing. But how do you edit something in a rush? Those of you who do it often know how labor-intensive and time-consuming it is. And aren't you risking mucking up the piece beyond repair by not having enough time to do it at a leisurely pace? Not if you know what you're doing.

Don't Print it Out

Lots of stuff has been written about the benefits of editing the old-school analog way. There are probably still editors out there who print out the digital copy they get, write notes in the margins (with indecipherable handwriting, of course), then scan and send it out to the writer. And, yeah, this method is great if you can afford to sit down with an iced coffee to take your time and ponder whether this sentence can stand to lose this or that word.

But not in a time crunch.

When you're pressed for time, doing the editing on a computer is the only way to do it efficiently. Not to mention the fact that you're saving paper this way!

Make Peace With Your Mistakes

Since you don't have a ton of time, you'll have to deal with the fact that none of your efforts are going to cut too deep into the text. If what you wrote has some deep-level issues, there's nothing you can do about it now. Make peace with what you wrote and the fact that you can only pretty much correct surface-level stuff.

And this might go against everything you've ever learned, but don't work too hard. The way you're doing this is focused on speed, not making something perfect (which, as you might know, can never be done in the first place). Instead of beating yourself up over how the piece is never going to be as stellar as it deserves to be, focus on making it the best you can with the resources that are available. That's the best you can do in this situation.

Get it Done in Two Passes

I've learned from experience (can you tell that I write in a rush often?) that two is the perfect intersection between time-saving and editing effectiveness. Two passes, each focused on a specific aspect, with a short break in the middle, are the way to go:

First, get on the sentence level. Read your entire piece sentence by sentence, trying to get to the core of what it's supposed to be. If it has obviously superfluous parts, take them out. If what you're editing is your first completed draft, consider rewriting most of them. Remember to manage your time and keep in mind that it doesn't need to be perfect at this point. If you see one sentence that can be split into two, most of the time the text will benefit from it. If you notice language that's too flowery, change it. This is the pass where you correct your grammar, too.

That's it! Hit send. You've done the best you can with the limits that you're under, and you can rest easy because you've submitted before deadline (or at least not as late as you could have been). Proceed to reward yourself with an ice cream.

Ernest Mendozza is a writer and blogger trying to find a balance between productiveness and binge-watching Netflix at 3 a.m. He writes about innovations in tech and social media. His best friend is his dog, Milo.

MORE ON WRITING AND MARKETING

Love your motto "Make Peace with Your Mistakes." It helps to keep publishing reminders about patience for the publishing industry. It seems too few understand that there a perfect book is very, very hard to find--even the ones published by the big guys.
Best,
Carolyn Howard-Johnson
Author of the multi award-winning HowToDoItFrugally Series of Books for Writers

Ernest, great post. These are helpful editing tips for writers to use before finally submitting to publishers and/or agents. I love that motto also!