Tropes in Literature #3: Conveniently an Orphan 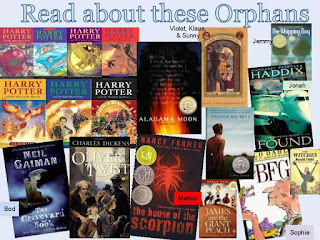 If you haven't seen my other posts on tropes, a trope is a common plot device, character type, writing element, etc.  I believe that many tropes are so common because they're popular, fun, and good—except that they've become so overused that they've lost some of their goodness.  These should be treated carefully and creatively.  Other tropes are simply a result of laziness or convenience.  These should often be avoided.

Whatever your opinion of tropes, they're fun to discuss.

This month's trope:  "Conveniently an Orphan."
(named by TVtropes.org)

Advantages of making your characters orphans:

-They can conveniently take off on adventures without any family to tie them down or make them look selfish and irresponsible for doing so.
-They don't have to constantly be interrupting the adventure and action in order to go home and visit their family or watch their niece's ballet recital.
-They don't have a support network already, so they'll need to depend more on themselves and their friends—perhaps new and unlikely friends.
-It forces young characters to solve difficult problems that normally their parents would solve.
-You have fewer characters to write.
-It provides a ready-made tragic backstory. ("My mother was murdered so now I'm a workaholic homicide detective who can't get close to people" or "I'm a delightful, sweet-tempered child who, for some strange reason, nobody has ever loved…until now.")
-It can provide motivation in the vein of, "You killed my father.  Prepare to die."
-The bad guy can't kidnap your character's family members in order to force him to do his will—which would, let's face it, be the logical thing for many bad guys to do.  But your character has no family, so…plot problem solved.
-Orphanhood tends to go well with various "Chosen One" tropes.
-If the character doesn't even know who his parents were, you have various twist possibilities ("Luke, I am your Father!" or "Oh, I'm actually not a milkmaid but a princess!").
-Readers LIKE orphan characters, perhaps because we identify with the loneliness typified best by orphans, perhaps because we like underdogs, perhaps because it's interesting to think about what we would be like without the influence of our parents and families.  Whatever the reason, orphans in literature are popular.

Disadvantages of making your characters orphans:

-If you're not careful, it can easily come off as a convenient cliché.
-It can come of as lazy.
-It can come off as unrealistic.  True orphans who grow up in horrible Dickens-like orphanages or in the dark side of the foster care system aren't always the sweet, innocent, well-adjusted people they are in old books.  Even true orphans do often have other family:  adoptive parents, biological uncles, cousins, grandparents, etc, and these would still provide kidnapping fodder for bad guys.  Some of this family might also be people your character could—and would—phone in a crisis.  So be careful not to write as if your characters grew up in a vacuum, even if both their parents have been dead for many years.

Where this trope appears:

The "Conveniently an Orphan" trope is VERY common in fantasy and science fiction, especially if you count characters who still have one parent alive:  Lord of the Rings, Harry Potter, Star Wars, The Belgariad, the Discworld novels, The Black Cauldron, half the fairy tales you can think of (though they may have one parent), The Wizard of Oz (though she has adopted parents she loves), The Hero and the Crown (still has a father), the Hunger Games (still has a mother).

Many other more mainstream books and classic works of literature also have orphans or characters with only one live parent.   Victor Hugo, Charles Dickens, Jane Austen, Louisa May Alcott, George Elliot, and various Brontes certainly partook.  James Bond is an orphan.  It's also common for the detectives in mysteries (especially TV crime dramas).  You'll see it sometimes in romances and women's lit and other genres.

And, of course, it's essential for sweet orphan stories like Anne of Green Gables (and Montgomery's Emily of New Moon), Annie, The Secret Garden and A Little Princess, Little Lord Fauntleroy (only one dead parent), Jane Eyre, A Series of Unfortunate Events, Heidi (though with a loving grandfather), The Boxcar Children, Pollyanna,  etc.  These are all great books, but you'll need a pretty original slant or some particularly compelling characters if you're going to do it now.

Melinda Brasher is back in the United States after spending two more years in the Czech Republic among castles and forests and hiking trails.  Her most recent sales are to Ember and Double Feature.  Visit her online at http://www.melindabrasher.com.
By Melinda Brasher - December 07, 2016

Melinda, I've never thought about making characters orphans and didn't realize they're in so many science fiction and fantasy stories. Helpful list of advantages and disadvantages on using them. Something to think about!

Joseph Campbell made it obvious that there is no such thing as a new plot structure. It is certainly valuable for anyone interested in literature to follow your trope series, Melinda, and to read his books!

Melinda, your ideas are always so fresh, they're a joy to read. I will keep this information in mind. It is a great help. Thank you.