Holiday Story: S'agapo, I love you 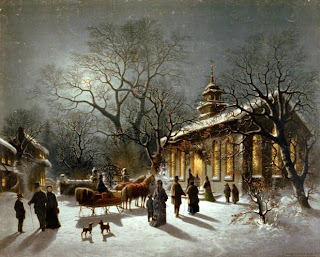 Every holiday season I like to post this short story of mine to give hope and a time of reflection to one and all. I hope you enjoy.

S'agapo...I love you
by Lea Schizas

The lights of the nursing room were unusually bright this Christmas Eve night. An outsider had visited Mrs. Sophia Adamopoulos earlier in the day. She brought a Greek dish, pastitsio, filling the halls with its aroma of cinnamon and pasta…a welcome change from the lingering odors of Lysol and urine.

The nurses greeted her, comforted her and explained the state her mother was in.

Armed with the latest update, Maria Adamopoulos stepped into her mother’s surroundings. Childhood memories hit her hard. The vision of her mother combing her beautiful long tresses and hugging her as she said, "Maria, s'agapo, I love you", enveloped her heart. Her mother cheering her at every track meet, making sure she was never late. Her mother’s laughter filling the house with joy as Maria practiced her words for Saturday's Greek school. All these images flashed before Maria as she faced the cold aberration she stepped into. No embroideries hung on the walls like in their family home. Mom's cassette player playing the cherished Greek songs she sang to, was missing, as well.

But the single picture that broke her heart was to see her mother sitting by the window, emptily staring, not outside at the panoramic garden view but at the empty walls within.

"Hello, momma." As Maria approached to hug her, Mrs. Adamopoulos flailed her arms in front of her, terrified.

The nurse ran in and immediately soothed her.

"Sophia, Sophia, calm down, you have a visitor. This is your daughter, Maria. She's come a long way to see you." Maria felt like running and shaking her mom to the present, to try and get her out of this Alzheimer stupor that gripped her.

Guilt rose in Maria. She thought I should never have listened to my brother. I should have stuck to my guns and brought mom back to Greece. Her brother had stopped visiting. He told Maria mom doesn’t recognize me, so why bother. Maria was here to bring her mother back home.

Sophia stared at Maria as if trying to bring about a memory forever lost in this mind disease. The nurse left them alone once more.

Slowly, Maria again approached her mother. "Look, ma, I made your favorite dish." She gently lifted the tinfoil and let her mother take a look.

Tears flowed down Sophia's cheeks. "Where is my memory when I really need it," she cried.

That night the dim lights magically lit brightly as if Sophia's memory and those dim lights were one.

Maria had entered her mom's hospital room as a stranger, but for one magical moment her mother embraced her like she used to, a long time ago, whispering the words Maria needed to hear once again.


I'd like to wish everyone a joyous and safe holiday season.
Lea Schizas
By Lea Schizas - Author/Editor - December 10, 2009

Ah, Lea, you brought tears to my eyes. My father had Alzheimer's and we ended up having to put him in a nursing home as it became too dangerous to keep him at home - he accidentally started 2 fires in a waste basket in his room.

His sister kept giving him cigarettes and matches every time she visited and he hid them until he used them.

It's a beautiful story, Lea.

A beautiful story. Thank you. My dad had early-stage Alzheimers but died before it progressed too far, for which I'm very thankful.

This is a beautiful story. I have 2 friends going through this very thing with their mothers. It is really hard on them.

A touching story and so true to the core of what families go through when dealing with this awful disease. Thank you for sharing.

Best wishes for a joyous holiday season to you, too, Lea. Thanks for reminding us to hold on to what is special while we still can.