There's a Gorilla in the Phone Booth! - The dangers of flashbacks 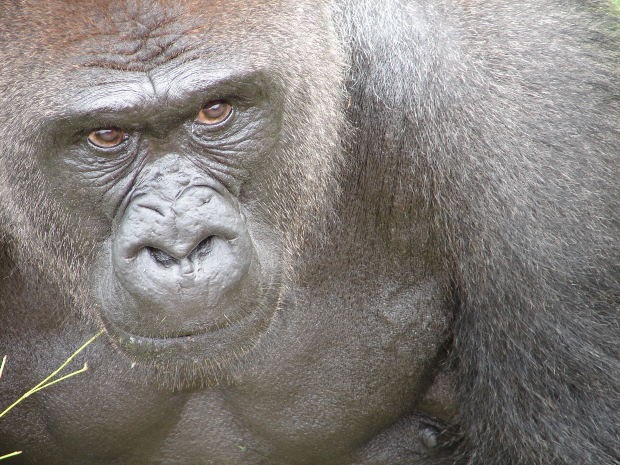 The fog was closing in. Marsha dashed across the road to the phone booth to call her husband to come and fetch her. With relief, she pulled open the stiff door and slipped inside. She peered towards the phone dial, and instead her eyes focused on a gigantic dark hairy chest. Fearfully she looked up, and up . . . until she made out the terrifying features of an adult gorilla. There was a gorilla in the phone booth!

His immense mouth opened and she gazed in horror at his vicious-looking teeth. She was about to be devoured by a raging primate. It reminded her of the time when she and her husband had gone to see the film, “Gorillas in the Mist.” It was a beautiful evening, their first real date. They had sat and eaten popcorn and drank soda. When they ran out of popcorn, Robert slipped his hand across and gripped hers. The rest of the film was a blur. All she remembered was what happened on their walk home . . .

Okay, this is a variation of a common theme for writers. You’ve created an exciting scenario. A gorilla is a massive animal, renowned for its phenomenal strength. We can think of the well-known advert of King Kong as he rips apart the jaws of a T-Rex, or of him wreaking havoc in New York City. He is not a creature to tangle with. And he’s certainly not something you want to share a phone booth with.

Why did the author put the gorilla in the phone booth in the first place? Because it’s a tiny enclosure. There’s no way anyone can win a battle with a gorilla in a phone booth. The victim would be ripped apart in no time. The tension is unbearable. The reader holds his breath.

And then he’s transported to the cinema. On a trip down memory lane. What a letdown.

What was the writer thinking? He’s created a breathtaking scene, and then left the reader hanging while he explores another part of the heroine’s life. It’s called a flashback, but it’s a dangerous technique. If the author doesn’t want to lose his reader, a flashback has to be handled wisely.

For writers, the lesson is: Stay with the gorilla in the phone booth! The story needs to keep moving forward. The reader doesn’t want to know about the time at the cinema. He wants to know how Marsha is going to handle her ordeal in the phone booth.

There are times for flashbacks, but less is more. Think twice before you leave your reader stuck indefinitely in a phone booth with a gorilla. It's not a nice place to be.

OVER TO YOU: How do you feel about flashbacks when you're reading? Any authors that do them well? Do you use them in your own writing? Leave a comment below.

SHIRLEY CORDER lives on the coast in South Africa with her husband, Rob. Her book, Strength Renewed: Meditations for your Journey through Breast Cancer contains 90 meditations based on the time she faced a gorilla in the cancer valley.

Shirley, what a great example of diminishing the tension in a story when using flashbacks in the wrong spot.

Shirley great post. Flashbacks that are timed well, can add clarity or mystery to a story. But ill-timed flashbacks can make a story drag.

And yet I've seen it done. I'm sure you have too. Thanks for commenting.

Yes you're right Mary Jo. Handled correctly they can add mystery and tension. Handled wrongly they're a disaster.

Thanks Debbie. Yes, they can be extremely effective if used correctly. Thanks for commenting.

Thank you for this, Shirl. This topic can't be discussed enough! I shoutd it out to my Google Plus peeps, of course!

Loved this and shared it, Shirley. Flashbacks are so tricky. I collect best examples from my reading to share with authors when I'm editing. This is so funny and so memorable. Tried to comment at the time but guess the gorilla crashed my computer. lol

Thanks Carolyn. And yes, I've seen so many riveting novels crash and burn because of a badly-timed or even unnecessary flashback. Sometimes background history is just that. It's meant to remain in the background!