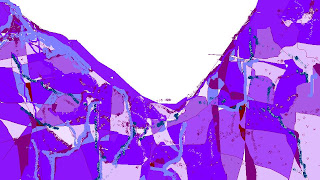 The more I write, the more characters I need to write about.

When I wrote "Relocated," my recently-published novel, for the 2010 Nano, I had no goal beyond overcoming my phobia about writing science fiction. But I got hooked on writing in the genre, on my characters, and the universe I'd created. Unwilling to let it go, I wrote two follow-on novels, featuring characters who appear in "Relocated," novels that I'm almost ready to submit, and I've started a fourth. This one features a new main character. He has a family, allies, and enemies -- more new characters.

The thing is, I'm unable to keep myself from spinning the continuing tale of my creations' lives. They have friends, relatives, children, co-workers. What's a writer to do? The lives of the old characters  did not stop with the end of the book. These characters march resolutely onto the pages of my manuscript, announcing what's happening in their lives, and prodding me to mention them in the text.  Their lives go on.

If E. is old enough to date, who is she seeing?  She's dating S. But how serious is it? Is there a woman involved,? If so, she's going to be another new character. Do I simply not mention she's seeing someone?

My characters form foursomes. Two of the characters from novel two have now found their third and fourth. They snuck into a scene in the novel I've just started, but I'm resisting introducing the two new women.

Perhaps it's time to bite the bullet and create a character bible for these folks to help me keep track of who's who. But I'm still left with all those stories, and deciding which ones to tell.

Margaret Fieland is the author of "Relocated," published by MuseItUp publishing, and available where ever ebooks are sold.

Peggy, it is amazing how writers create universes, with beings and all. And, it's wonderful when the characters and stories just don't stop. It does sound like it's time to get your characters organized. :)

Wow, Peggy - three novels from a single nano session is an amazing result I use simple spreadsheets to keep track of my characters, but over 3 novels you might need a proper database, especially if there are age changes.

Maggie, having created a universe, planets, aliens, politics, art, etc, I was loathe to start over again :-).

Peggy, I am so in awe of authors who have the patience to create a whole new universe. And I love the idea of a new sci-fi series. Looking forward to it.

About those pesky characters who all want their own series? ... give it to 'em!

What have you got to lose?
:D