The Value of a Good Editor

One of my writing pet peaves is that authors often get credit that their partnership with their editor(s) is due. Perhaps, if you wade through the "Acknowledgements," you might appreciate the number of people it takes for the author to arrive at the finished/polished product. I confess, I read the
"Acknowledgements," but really, how many readers can be relied on to do that?

Preaching to the choir a bit here, but, we writers know how valuable an editor's opinion is, from pros to critique groups, family and friends; and for children's stories, kids. Others' ideas and opinions open up worlds that may not have been considered. One of my instructors once told me one doesn't write a book, one re-writes a book.

Start by Changing Hats
It is crucial to keep your writer's hat on to revise as much as possible before asking someone else to read your work. If you're a beginner, you may need more advise than a more experienced writer. I know I did and still do. So, if what you offer is the best you can do, after running through your own checklist(s), then be satisfied with that. An editor once told me that I am going to "make it." You know why? No matter how much she finds that needs revision, I'm grateful for her insights and always work to improve by considering her advice. The writers who never give up, she says, are the ones who succeed. For it is well known (to quote the lovely phrase read often in Alexander McCall Smith's books), the best way to learn to write is to: Write!

When it's time to don your editor's hat, run through a checklist to make sure you've covered as many bases as possible. Start with a standard list and add to it as you become more experienced. My list has blossomed into a folder and encompasses the three types of writing I've focused on so far: articles, short stories and now, children's novels.

Basic checklist for a children's story
Make sure your story has:
A Peek at Editor Know-How
Back in the day (in the '90s), I dipped a toe as a correspondent for our local newspaper. My very first published article, now framed and resting on my wall, suffered losing my beautiful, well-thought-out title to a drastic editor-knows-best change. After that, my poignant summaries and heartfelt endings in many articles suffered the last and sometimes multiple paragraph cuts at the end, for lack of space. Most painful, was the cut in pay (pay, you say? Yes, those were the days when newspaper correspondents got paid) I suffered at the lens of my husband, whose accompanying photograph made one-third more than my article. It's how I grew my first layer of skin. The bonus: I learned to enjoy editors' economy of words. I wouldn't call our exchanges conversations, exactly, but in the editors' rushed and few words, I understood what was expected of me; and learned to skip-the-chit-chat, easy with even a glimpse at the volume of paper on my editors' desks.

Today, it is doubtful that any local publication can pay its writers (hopefully some do), but writing for them for free still gives writers the benefit of working with an editor (and getting published). Just for fun, here is a short list of some of the ways editors have helped my pieces and stories see print

(albeit, not without some degree of pain):
Next month: Critique Group Do's and Don'ts
﻿ 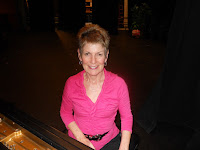 Linda Wilson, a former elementary teacher and ICL graduate, has
published over 100 articles for adults and children and six short
stories for children. Recently, she completed Joyce Sweeney's
online fiction and picture book courses. She is currently
working on several projects for children. Follow
Linda on Facebook.