OK, you’ve decided to write a story and you’ve created a character. Now you have to give her a problem to solve and put him in some kind of jeopardy. 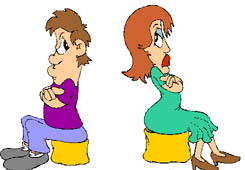 Conflict can be external: a villain, an opponent, a set of cirucmstances, the environment or landscape. It can be internal: fear, distrust, uncontrollable rage, a number of things. A book can have both. In Lord of the Flies, what’s at stake externally is survival; internally, it’s fear vs courage. Every character should have the potential to conflict with every other character, whether that potential is realized or not.

Is it a fair fight? A motivation against no opposition is boring. A character who always gets everything he wants, succeeds in every task, wins the girl/guy with no problem, has no drama. Remember PLOT is a VERB.

Likewise, pure victimization is not only dull, but depressing. Conflict doesn’t come in oppressing or being oppressed—it comes in the struggle to break free. The reader wants the final outcome to be in doubt. He likes the anticipation of conflict, a situation created where conflict is waiting to happen. (i.e. Character A is a former Nazi and B is a Holocaust survivor. Neither knows this info about the other. They sit in a room & make small talk. All the while, we wait for the conflict to erupt. Maybe it never does. Maye it’s chapters later, after they’ve become friends.)

Which leads us to the next step: Storytelling is not about giving away information, but about withholding it. Why do we prefer to sit down with a 300-page book (or in the case of Harry Potter, 800 pages), rather than just read a 2-3 page synopsis of a story? Because we want suspense, we want to go on this journey, this adventure, with someone we can care about.

Suspense is about anticipation. It is about what we do not have, what has not happened, about what might happen. It’s about the process of watching events unfold. (i.e.While the victim is being stalked, suspense looms. Once the victim is murdered, the suspense disappears.) Waiting to find out builds suspense, drama.

Creating Suspense.
1. The goal. What does the character want to achieve?
2. The stakes. What is at risk for the character?
3. Danger. remember that danger is a matter of perspective—it only needs to exist in a character’s head to create suspense.
4. The Ticking Clock. A time limit heightens suspense.
5. Inablility to take action. For example, in Hitchcock’s The Rear Window, the protagonist has a broken leg, hears the killer approaching, but is helpless to go anywhere.
6. The Unknown. We can bear almost any form of torture as long as we know what it is we are getting into. But keep us in the dark, give us time to think about the possiblities and the suspense will be unbearable.

Kurt Vonegut once said that a hero “should always want something, even if it’s just a glass of water.” An instructor in a writing class told us there should be conflict on every page, even if the character is too hot or cold.

What other ways have you written or read that create tension or conflict?

A native Montanan, Heidi M. Thomas now lives in Northwest Washington. Her first novel, Cowgirl Dreams, is based on her grandmother, and the sequel, Follow the Dream, has recently won the national WILLA Award. Heidi has a degree in journalism, a certificate in fiction writing, and is a member of Northwest Independent Editors Guild. She teaches writing and edits, blogs, and is working on the next books in her “Dare to Dream” series.
By Heidiwriter - September 08, 2012

I so agree with you Heidi and your 6 questions are spot on. As Storyfix's Larry Brooks puts it, all fiction is about something "happening" and that "happening" is a character facing conflict.

super summary of using conflict to create suspense. Thanks Heidi--shall print it out to keep with my work notes.

super summary of using conflict to create suspense. Thanks Heidi--shall print it out to keep with my work notes.

Love your six points. Simple and easy to follow. Thanks!

This entire post is SO well done and has a lot of great tips. Thanks so much!

Heidi, great pointers on creating conflict. I love the image. :)